Some facts about Aberlour's history

there exist 4 different dates of foundation of Aberlour Distillery:

1828 was first mentioned as year of  foundation on an Aberlour bottle, followed by 1845.

1879 a fire devastates most of the distillery.

James Fleming (1830-95), a local banker and owner of Dailuaine Destillery,

built a new distillery about 1 mile away from the old site.

in this time (1894) one of the first known bottlings as Pure Malt appeared.

- 1898 main parts of the distillery were distroyed by fire, rebuilt later on,

after a short period owened by James Donald Stewart (as a closed distillery),

- 1974 bought by Groupe Pernod Ricard * from France until today.

Licens by Chivas Bros. Ltd (along with Strathisla and Tormore).

and switch from direct heating to steam heating.

- 1962 The distilleries floor maltings are terminated

(Alan Winchester becomes the new Master Distiller at The Glenlivet)

makes Aberlour on place 7 on the top seller list.

> about half of the production is used as Single Malt.

> bottling is done in Killwinning, Ayrshire.

Much more informations you will find on the Aberlour Homepage

or in the most informative book: 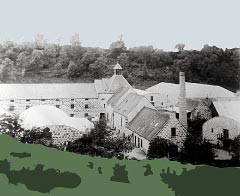